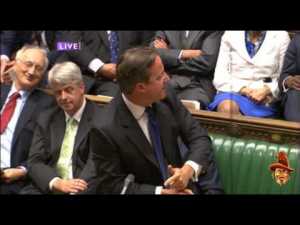 During PMQ’s yesterday David Cameron took great pleasure in belittling Ed Milliband over the recent revelation that the Labour Party had advised one of its wealthy donors on how to avoid tax. He revelled in his schoolboy taunts accompanied by the usual mindless guffaws from Osborne and the rest.

This, of course, is business as usual from the shallow and integrity-deficient government benches. I’ve noticed over the hellish past three years that Cameron uses PMQ’s – when he turns up for it – primarily to blatantly ridicule  the front benches opposite instead of doing what we should expect a PM to do which is answering questions candidly.We’re paying him to turn up and inform us of what government are doing NOT engage in rowdy school yard catcalling. He comes across as a wannabe stand-up comedian rather than a serious statesman. And a pretty poor apology for one at that.

But by attempting to make party political capital from Labour’s tax avoidance gaffe he should be very careful because this is very definitely as case of the kettle calling the pot black.

Thanks to political commentator Paul Staines’ Guy Fawkes blog ( http://order-order.com/2012/07/02/tories-advised-top-donors-how-to-avoid-tax/) I discovered that generous Conservative Party donors have been offered advice on how to avoid tax through donating for years.

and with the declared mission ‘to strengthen the financial future of the Conservative Party’ they urge potential donors to ‘protect the country you love, defend the values you cherish’ by giving some of their wealth to the Party.

(Aside: One of the values Cameron definitely doesn’t cherish is honesty, see for instance http://wp.me/p2sftc-7TU)

Donors are encouraged to  leave some of this wealth to the Party when they die.In order to do this would be benefactors are directed to this link which explicitly mentions tax avoidance,

Obviously Mr Cameron didn’t realise when he opened his mouth in the Commons yesterday that he was putting his expensively shod foot right in it!

If you click on the link this is part of the advice you get:-

“How leaving a legacy can reduce your beneficiaries’ inheritance tax bill:

If the value of your estate is more than the current threshold your beneficiaries will have to pay inheritance tax (currently 40%) on anything beyond this.However, a legacy left to the Foundation can be subtracted from the value of your estate before inheritance tax is calculated – bringing the total value of the estate closer to the threshold so that any tax due can be reduced or even removed completely.”

According to Paul Staines ALL political parties give advice on tax issues to donors. And, of course, at present sadly its all perfectly legal.

We’re going to hear a lot more moralising about tax avoidance/evasion in the coming weeks as the G8 meeting gets under way. And I’ve no doubt Cameron and Osborne will be extracting as much political righteousness from it as possible. As we can see they’re in no position to stomp around over the moral high ground, as Cameron was doing yesterday.

This is dishonest politics and its time we stopped them.