A shocking story that starkly highlights how we are now living in a world of capitalism-with-the-gloves-off. They don’t even try to justify the callous cruelty of it anymore as this extract shows:-

In a capitalist society, the motive behind the production of food is not to feed people, housing is not made to give them shelter, clothing is not made to keep them warm, and health care is not offered primarily to keep people healthy. All of these things, which are and should be viewed as basic rights, are nothing other than commodities—to be bought and sold—from which to make a profit. If a profit cannot be made, usually due to overproduction in relation to the market, the commodity is considered useless by the capitalist and destroyed.

I often receive emails from a group whose views I don’t always agree with. But on this occasion I have to speak out in support of what they say. One of their number sent me the photos I’ve reproduced here. The pictures tell their own story. They were sent to me  along with the following statement,

No one has been able to explain to me why young men and women serve in the British Military for 20 years, risking their lives protecting freedom, and only get 50% of their pay on retirement, while Politicians hold their political positions in the safe confines of the capital, protected by these same men and women, and receive full-pay retirement after serving one term.  This is the same in Canada, the US and Australia.

It just does not make any sense. 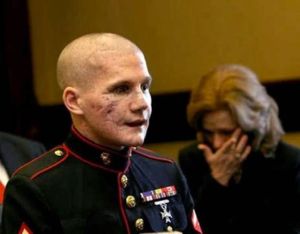 When confronted with photos like this there’s NO argument that can convince me that sending our young men and women to fight wars to uphold the ‘values’ of capitalism is justified.

In a world where corporate capital rules the day , where nation states have been subordinated to the interests of multinational companies and where wars are fought to further those interests, all soldiers everywhere are conscripts in the army fighting to uphold those interests.

The fact that they are discarded in this way when injured only serves to demonstrate the vile priorities of those in power.