On 1st September 2012 it became a criminal offence to be found squatting in a residential building, punishable by a fine of £5000 or six months in prison. Section 144 of the new Legal Aid, Sentencing and Punishment of Offenders Bill was rushed through Parliament with little attention being paid to the consultation responses from various homeless charities and police, 98% of which were against the legislation.

According to a report in March this year by Squatters Action for Secure Homes (SQUASH) evaluating the first six months of the Bill, there have been 33 arrests leading to 10 convictions. Their press release summarises their findings thus:-

“The Case Against Section 144″ Press Release

Entitled ‘The Case Against Section 144’, SQUASH (Squatters Action for Secure Homes) are launching a new report and campaign in Parliament today.

The report’s findings suggest the major concerns regarding criminalisation that arose during the government’s consultation process have been proven right, with homeless and vulnerable people disproportionately affected. No arrests so far have been for squatters displacing anyone from their home, which does suggest that the Criminal Law Act 1977 was sufficient for dealing with squatters – as predicted by many legal experts.

The report concludes with a call for repeal of Section 144. It provides a detailed six-month analysis of the effects that the new legislation has had since its introduction in September 2012, and sets this against the wider backdrop of the UK recession, high homelessness rates and current housing crisis.

The report will be launched today in the House of Commons at a meeting of concerned MPs, Lords, lawyers, homelessness groups and academics. An online government e-petition petition calling for repeal has reached over 2000 signatures in only a few weeks.

Last week, a homeless person in Kent died outside of an empty bungalow, media reports suggest he was prevented from going inside the building by Police because of the new offence of Section 144 which makes it a criminal offence to squat inside a residential property.

“The new law is appalling. Homeless people are being put in jail for using empty buildings to keep a roof over their head. Section 144 needs to go and any further criminalisation quickly dismissed”.

“Squatting is what people do when they get desperate, it is not criminal behavior. Squatting rises when inequalities increase and housing is not treated as a necessity. This is a great report – every MP needs to read it.”

“”This meticulously researched report confirms what we feared about the effect of the new laws criminalising squatting. People are being made unnecessarily homeless and very vulnerable people are suffering as a consequence. This legislation was based upon prejudice and has only made matters worse. This new evidence demonstrates so clearly the need to repeal this misguided law.”

“A few months after the Government brought in the disgraceful law criminalising the homeless occupying an empty house we can see that some of the most needy are indeed suffering in the way that we feared. This is a very useful report that should make people think hard.” 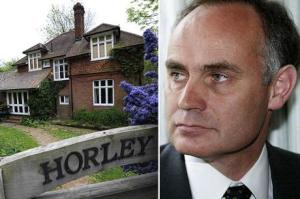 There was much opposition to s144 during Parliamentary debates of the Bill which was led by Tory Justice Minister Crispin Blunt pictured here alongside his £485k Surrey constituency home – he has a second family home in London which is heavily subsidised by tax payers. Labour MP John McDonnell tabled an amendment which had it been successful  would have protected the genuinely homeless who were squatting in long empty properties. Blunt, however, put forward several specious arguments to justify the criminalisation of squatters. He first of all blamed the squatting homeless for the fact that properties were empty in the first place:-

Many homelessness charities, for instance, are likely to continue to say that the new offence will criminalise homeless and vulnerable people who squat in run-down residential properties, but one of the reasons that the properties remain in that state is that the owners cannot get in to renovate them because the squatters are present.

And its clear whose interests this government are more concerned about and just how out of touch they are by the following excuses he makes for the properties being left empty by their owners:-

We consider that this option strikes the best balance. It will protect those who are likely to suffer most from squatting—those whose homes are taken over by squatters.… that point was made by squatters and squatters groups, but respondents who made that argument were missing one rather important point: the houses are not theirs to occupy. There are many reasons why a house might be left empty for more than six months without any steps being taken to refurbish, let or sell the building. For example, somebody might decide to do charitable work in another country for a year, or they might visit their second home during the summer months only….

Clearly, on Planet Cameron its quite normal to be able to afford to take a year off work and commonplace to own a second home. Blunt was obviously oblivious to the irony of such normalisation of privilege during a debate essentially about the growing thousands of people without hope of a secure roof of any kind over their heads.

When you consider the number of empty houses there were at the time of this debate in November 2011 – a massive 710,000 – Blunt is really stretching our credibility if he wants us to believe that they are all merely empty because their owners are off doing good works in foreign climes or languishing in luxury in their second homes, unable to get back into their properties because of all those inconvenient paupers cluttering up the place.

McDonnell provided the charming Mr Blunt with a few statistics about the squatting population, no doubt hoping to shame him into a more compassionate state:-

41% of homeless squatters report mental health needs, 34% have been in care, 42% have physical ill health or a disability, 47% have experienced drug dependency, 21% are self-harming, 15% have a learning disability, and 90% have slept rough. Those are the people whom this legislation is about to criminalise…..The Crisis survey found that many of those people had no alternative, and that 78% had approached the local authority for help and been turned away. Among the housing charities—Crisis, Thames Reach, Shelter, Homeless Link, Housing Justice, St Mungo’s—there is a fear that the new legislation could criminalise extremely vulnerable people and force them into more dangerous situations, particularly rough sleeping. 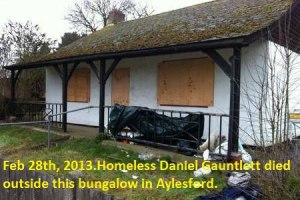 What MP McDonnell feared but couldn’t have known at the time, was that there could be very drastic consequences for the vulnerable homeless he was describing. Tragically, he was proved right when not six months later homeless Daniel Gauntlett died from hypothermia whilst sleeping outside the abandoned and boarded up bungalow pictured here after being warned by police that if he entered the property to shelter from the bitterly cold weather he would be arrested and possibly sent to jail. Daniel decided to obey Blunt’s law and died as a consequence. No doubt Blunt from the comfort of one of his own homes was ‘unavailable for comment’, despite there also being no doubt that he and his government was indirectly responsible for this young man’s death. As McDonnell said at during the debate in November 2011:-

When there are 40,000 homeless families, 4,000 people sleeping rough in the capital, and 1.7 million households on waiting lists, desperate for decent accommodation, it is immoral that private owners should be allowed to let their properties stand empty for so long.

At lot has happened since that debate that has made the housing situation in Britain far worse than it was back then. As the tide of welfare benefit cuts and bedroom tax has swelled so have the numbers of families whose housing has become very insecure indeed. SQUASH  have estimated that the cost of mitigating the effects of s144 alone could cost around £790 million over the next five years. We already know that the consequences of the bedroom tax are going to cost millions in increased housing benefit as families are forced into private sector renting. Not to mention the possible burden on the NHS from increased ill health due to stress, malnutrition and other poverty related conditions. If this is the government’s idea of saving money then I can only conclude that they are dangerously crazy. 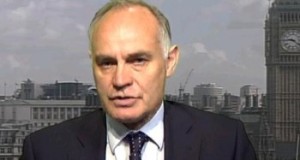 Mr Blunt may not show much concern for the finances of the homeless and being Tory is automatically implicated in the media hate campaign which characterises the poor as workshy scroungers living it up at the state’s expense. I’m always amazed by the blunt dishonesty of such double standards. This Telegraph report of 2009 is a good illustration of what I mean:-

Documents lodged with the fees office show that Mr Blunt claimed that London was his second home from 1997.It was not until April 2003, when he discussed his Additional Costs Allowance with the fees office, that an official noted: “It was clear that his London home is his main home and has been for some time. His family live in London and his children attend London schools.”

The official said that “it would appear” Mr Blunt had nominated his London home as his second home because of his “mortgage arrangements”. He added: “I suggested that he change his nomination.” Mr Blunt then wrote to the fees office agreeing to move his “main home” designation to London, but suggesting that he took out an additional mortgage on his house in his Surrey constituency, and secure it on his home in south-west London. He said: “I will only claim mortgage interest from my additional cost allowance up to a sum not exceeding the valuation of my now ‘additional home’.”

The fees’ office reply is not recorded, but land registry documents show that Mr Blunt sold the property in Horley, Surrey for £224,000 in July 2004. He bought another property in the same village for £485,000 in November 2005 and claimed £16,000 in stamp duty and legal bills.

Daniel Gauntlett lost his life because he was a law abiding citizen. Mr Blunt commits what can only be seen as fraud without a prick of conscience and loses nothing. On Planet Cameron this is known as ‘fairness’. Where I come from its known as corruption.

1 thought on “The Crazy Tory Law That Criminalises The Homeless And Could Cost £790 Million.”